Prophecies are of great importance among God’s people  as early as the seventh generation from the father of humankind.

(Jude 1:14-15) And Enoch also, the seventh from Adam, prophesied of these, saying, Behold, the Lord cometh with ten thousands of his saints, to execute judgment upon all, and to convince all that are ungodly among them of all their ungodly deeds which they have ungodly committed, and of all their hard speeches which ungodly sinners have spoken against him.

The spirit of prophecy is the testimony of Jesus.

To whom a prophecy is being fulfilled, there rest the testimony of Jesus.

The first century Christians were admonished not to despise prophecies and prophesying.

There are prophecies meant solely to be fulfilled in the nation of Israel.

There are prophecies meant to have dual fulfillment: both for the Jews and the Gentiles.

In fact, the prophet Jeremiah was commanded to prophesy not only for Israel, but for other nations.

(Jeremiah 1:5) Before I formed thee in the belly I knew thee; and before thou camest forth out of the womb I sanctified thee, and I ordained thee a prophet unto the nations.

It is understandable; therefore, that there are prophecies which fulfillment can happen in other nations of the world.

(1 Kings 8:41) Moreover concerning a stranger, that is not of thy people Israel, but cometh out of a far country for thy name’s sake…

(Isaiah 61:5) And strangers shall stand and feed your flocks, and the sons of the alien shall be your plowmen and your vinedressers.

The Philippines (formerly called “Las Islas Filipinas” in honor of King Philip II of Spain), which is a group of Island in the Pacific Ocean, is included in Biblical prophecies.

(Isaiah 24:15) Therefore in the east give glory to the LORD; exalt the name of the LORD, the God of Israel, in the islands of the sea. NIV

(Psalms 50:23) Whoso offereth the sacrifice of thanksgiving glorifieth me; And to him that ordereth his way aright Will I show the salvation of God.

The word used ‘whoso’ or whosoever qualifies anybody that offers thanksgiving to God. A collateral prophecy from Jeremiah, a prophet for nations outside of Israel, states:

(Jeremiah 30:19-22, 24) And out of them shall proceed thanksgiving and the voice of them that make merry: and I will multiply them, and they shall not be few; I will also glorify them, and they shall not be small. Their children also shall be as formerly, and their congregation shall be established before me, and I will punish all that oppress them. And their nobles shall be of themselves, and their governor shall proceed from the midst of them; and I will cause him to draw near, and he shall approach unto me: for who is this that engaged his heart to approach unto me? saith the LORD. And ye shall be my people, and I will be your God…

…The fierce anger of the LORD shall not return, until he have done it, and until he have performed the intents of his heart: in the latter days ye shall consider it.

(Bro. Eli Soriano preaching in Araneta Coliseum, Philippines, one of the largest and more famous domes in the world, to less than 30,000 people searching for the genuine Word of God. This “Bible Exposition” was also broadcast simultaneously all over the world via internet, and through the facilities of Globecast Satellite servers.)

In the prophecy of Jeremiah, it was emphasized that the people of God mentioned, will have a governor that will come out from among them. They are called God’s people; the time of their existence is explicitly written: The later days or the end times. A collateral prophecy was written by Daniel for the end times.

(Daniel 12:4, 9-10) But thou, O Daniel, shut up the words, and seal the book, even to the time of the end: many shall run to and fro, and knowledge shall be increased…

Brother Eli is a nobody, but the wisdom and understanding that he has, because of his fear of the Lord, is undeniable and irrefutable: After all, the prophecy does not require a special somebody in human society to be the preacher of the true teaching of the Lord Jesus Christ.

(John 7:17) If any man will do his will, he shall know of the doctrine, whether it be of God, or whether I speak of myself.

The phrase ‘any man’ may apply even to the humble person of Brother Eli. What is vital to determine is the doctrine — if it comes from God, from the Bible, or from one’s self.

He that speaks in behalf of God for His glory is sent by God.

(John 7:18) He that speaketh of himself seeketh his own glory: but he that seeketh his glory that sent him, the same is true, and no unrighteousness is in him.

There are those that speak of themselves — not coming from God, or from the Bible!

He that fears the Lord and doeth righteousness is acceptable unto Him.

(Acts 10:34-35) Then Peter opened his mouth, and said, Of a truth I perceive that God is no respecter of persons: But in every nation he that feareth him, and worketh righteousness, is accepted with him.

The Philippines as a nation, and Brother Eli as a citizen of the Philippines, is a fulfillment of this prophecy.

Brother Eli, whenever he preaches, reads the Bible. Questions are answered by the Bible (See video below).

(Jonathan Hudson of Los Angeles, California asks Brother Eli if God can commit sin. In return, Brother Eli answers his question not from his own capacity, but from biblical verses that was inspired by the Holy Spirit of God)

His work and manner of preaching fits another prophecy.

(Revelation 1:3) Blessed is he that readeth, and they that hear the words of this prophecy, and keep those things which are written therein: for the time is at hand.

The Bible says, “Do not bow down thyself unto man-made images nor worship them.”

(Acts 17:29) Forasmuch then as we are the offspring of God, we ought not to think that the Godhead is like unto gold, or silver, or stone, graven by art and man’s device.

Leaders of the Catholic Church command their members to bow, worship, and pray to graven images. Are these leaders sent of God?

(Matthew 23:9) …call no man your father upon the earth: for one is your Father, which is in heaven.

Catholic leaders wanted to be called father — against the teachings of the Lord Jesus Christ.

(Hebrews 7:5, 12) And verily they that are of the sons of Levi, who receive the office of the priesthood, have a commandment to take tithes of the people according to the law, that is, of their brethren, though they come out of the loins of Abraham…

…For the priesthood being changed, there is made of necessity a change also of the law.

Collection in the New Testament Church is:

(1 Corinthians 16:1-2) Now concerning the collection for the saints, as I have given order to the churches of Galatia, even so do ye. Upon the first day of the week let every one of you lay by him in store, as God hath prospered him, that there be no gatherings when I come.

Tithing is not imposed; instead, the ‘Christian heart’ decides how much to give.

(2 Corinthians 9:7) Every man according as he purposeth in his heart, so let him give; not grudgingly, or of necessity: for God loveth a cheerful giver.

And what is shocking is that the leader of the famous 700 Club, International is asking as high as 90%.

Apollo Quiboloy teaches a month of sacrifice, which is not Biblical and even, dictates the amount that a member should give. 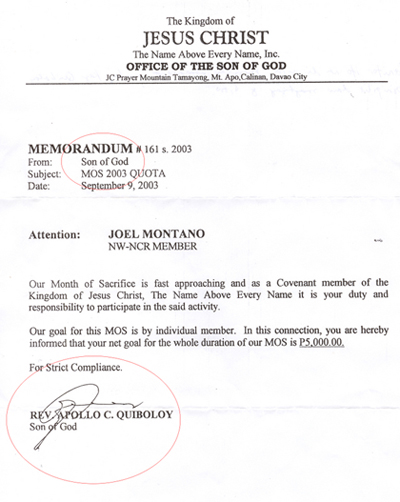 Another foolish teaching of this false prophet is that the new Jerusalem is his native city of Davao in the Philippines (See image below), to where God, allegedly, will transfer His throne. 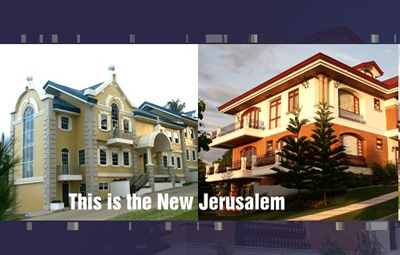 (He has chosen Davao City to become His New Jerusalem. The New Jerusalem will become the center of the universe. God’s throne will be moved from the third heaven to this earth. — Taken from the official website of the Kingdom of Jesus Christ)

A similar foolishness came from one of the false prophets of the Americas, Joseph Smith — claiming (which never came true) that New Jerusalem will be in the State of Missouri, USA.

The Bible tells us that the New Jerusalem will come from above — from God; not from this earth.

(Revelation 21:1-2) And I saw a new heaven and a new earth: for the first heaven and the first earth were passed away; and there was no more sea. And I John saw the holy city, new Jerusalem, coming down from God out of heaven, prepared as a bride adorned for her husband.

This brief insight will make everybody realize that the teachings of the Bible being preached by Brother Eli is very far from the erroneous teachings of so many so-called ‘great’ religious leaders of our times.

We will continue, God willing, to compare the erroneous teachings and practices of religious leaders of our times in the next issue of this blog.

God Bless You All.

From Dust to Man: A Scientific Proof

Paul Labored More Abundantly than the Other Apostles

The Roman Catholic Church is Not the True Church of God

The Church of God is Needed for Salvation

The Church of the Bible: The Only 100% True Church

The Covenant on the Fleshy Tables of the Heart