(Luke 6:20-23) “And he lifted up his eyes on his disciples, and said, Blessed be ye poor: for yours is the kingdom of God. Blessed are ye that hunger now: for ye shall be filled. Blessed are ye that weep now: for ye shall laugh. Blessed are ye, when men shall hate you, and when they shall separate you from their company, and shall reproach you, and cast out your name as evil, for the Son of man’s sake. Rejoice ye in that day, and leap for joy: for, behold, your reward is great in heaven: for in the like manner did their fathers unto the prophets.”

Lazarus, in the parable of the rich man, was able to make it to Abraham’s bosom: representing happiness in heaven with the Father.

(Luke 16:19-23) “There was a certain rich man, which was clothed in purple and fine linen, and fared sumptuously every day: And there was a certain beggar named Lazarus, which was laid at his gate, full of sores, And desiring to be fed with the crumbs which fell from the rich man’s table: moreover the dogs came and licked his sores. And it came to pass, that the beggar died, and was carried by the angels into Abraham’s bosom: the rich man also died, and was buried; And in hell he lift up his eyes, being in torments, and seeth Abraham afar off, and Lazarus in his bosom.”

To the contrary, the rich and the educated that trust in themselves and in their wealth can hardly make it to heaven.

The rich are admonished by God to trust in Him, and not on their wealth to be worthy of the kingdom of heaven.

(1 Timothy 6:17-19) “Charge them that are rich in this world, that they be not highminded; nor trust in uncertain riches, but in the living God, who giveth us richly all things to enjoy; That they do good, that they be rich in good works, ready to distribute, willing to communicate; Laying up in store for themselves a good foundation against the time to come, that they may lay hold on eternal life.”

Homosexuals have made it to the congress and the senate of my home country. The possibility of an empire having ruled by a homosexual is 100 percent.

Homosexuals are human beings. All human beings are product of God’s pro-creative power. What is attainable by ‘normal’ human beings (if homosexuals are considered by others as abnormal) can be equally attained by them, also. But how about making it to heaven? The Bible has this to say:

(1 Corinthians 6:9-11) “Know ye not that the unrighteous shall not inherit the kingdom of God? Be not deceived: neither fornicators, nor idolaters, nor adulterers, nor effeminate, nor abusers of themselves with mankind, nor thieves, nor covetous, nor drunkards, nor revilers, nor extortioners, shall inherit the kingdom of God. And such were some of you: but ye are washed, but ye are sanctified, but ye are justified in the name of the Lord Jesus, and by the Spirit of our God.”

The verses made mention of ‘effeminate’ or homosexuals, and abusers of themselves with men, but they were accepted in the Church and sanctified through the power of God and the Spirit of Christ.

God wants all men to be saved.

(1 Timothy 2:4) “…who desires all men to be saved and to come to the knowledge of the truth. RSV

Many a pastor or religious leader of our time has erroneously associated homosexuality with sodomy. They mock homosexuals and condemn them to hell because Sodom was destroyed by God and appointed unto everlasting destruction; but a careful study of the scriptures will reveal to us that homosexuality is not sodomy and sodomy is not homosexuality.

(Jude 1:7) “Even as Sodom and Gomorrah, and the cities about them in like manner, giving themselves over to fornication, and going after strange flesh, are set forth for an example, suffering the vengeance of eternal fire.”

The verse says that this cities — including Sodom and Gomorrah, have given themselves to fornication and have gone after strange flesh.

Yes, because they have, in their lust, ‘left the natural use of women and burned in their lust one towards another, men with men, and women with women’! THESE ARE NOT HOMOSEXUALS. Homosexuals, in their desire, do not lust with women. Although a homosexual do it with a man, he does not do it with a woman. These people of Sodom and Gomorrah are not homosexuals, but perverts. The parallelism was mentioned by Jude. Observe the two verses:

(Jude 1:6-7) “And the angels which kept not their first estate, but left their own habitation, he hath reserved in everlasting chains under darkness unto the judgment of the great day. Even as Sodom and Gomorrah, and the cities about them in like manner, giving themselves over to fornication, and going after strange flesh, are set forth for an example, suffering the vengeance of eternal fire.”

The ‘angels’ mentioned by Jude left their ‘own habitation’ and kept not their first estate, even as Sodom and Gomorrah have left the ‘natural’ and turned into strange flesh. What did these angels do, prompting God to condemn them into eternal fire?

(Genesis 6:1-7) “And it came to pass, when men began to multiply on the face of the earth, and daughters were born unto them, that the sons of God saw the daughters of men that they were fair; and they took them wives of all which they chose. And the LORD said, My spirit shall not always strive with man, for that he also is flesh: yet his days shall be a hundred and twenty years. There were giants in the earth in those days; and also after that, when the sons of God came in unto the daughters of men, and they bore children to them, the same became mighty men which were of old, men of renown. And GOD saw that the wickedness of man was great in the earth, and that every imagination of the thoughts of his heart was only evil continually. And it repented the LORD that he had made man on the earth, and it grieved him at his heart. And the LORD said, I will destroy man whom I have created from the face of the earth; both man, and beast, and the creeping thing, and the fowls of the air; for it repenteth me that I have made them.”

These sons of God who took the daughters of men as wives are angels! Angels are called in the Bible as ‘sons of God’ singing with joy during the laying of the foundation of the world, when there were no human beings yet.

(Job 38:4-7) “Where wast thou when I laid the foundations of the earth? declare, if thou hast understanding. Who hath laid the measures thereof, if thou knowest? or who hath stretched the line upon it? Whereupon are the foundations thereof fastened? or who laid the corner stone thereof; When the morning stars sang together, and all the sons of God shouted for joy?”

Some of these angels sinned against God when they left their first estate and habitation, and mingled with humans, and have produced a hybrid called ‘giants’ in the days of Noah. These angels are the spirits that were imprisoned, to whom Christ, when He died, visited and to whom He heralded His victory over evil, according to Peter.

(1 Peter 3:18-20) “For Christ also hath once suffered for sins, the just for the unjust, that he might bring us to God, being put to death in the flesh, but quickened by the Spirit: By which also he went and preached unto the spirits in prison; Which sometime were disobedient, when once the longsuffering of God waited in the days of Noah, while the ark was a preparing, wherein few, that is, eight souls were saved by water.”

The word ‘preached’ used by Peter is ‘kerusso’ in Greek, which means to herald.

(Genesis 19:1) “The two angels arrived at Sodom in the evening, and Lot was sitting in the gateway of the city. When he saw them, he got up to meet them and bowed down with his face to the ground…” NIV

(Genesis 19:4-8) “…Before they had gone to bed, all the men from every part of the city of Sodom-both young and old-surrounded the house. They called to Lot, “Where are the men who came to you tonight? Bring them out to us so that we can have sex with them.” Lot went outside to meet them and shut the door behind him and said, “No, my friends. Don’t do this wicked thing. Look, I have two daughters who have never slept with a man. Let me bring them out to you, and you can do what you like with them. But don’t do anything to these men, for they have come under the protection of my roof.” NIV 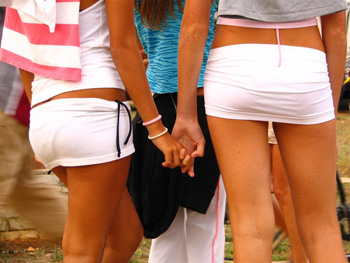 These men of Sodom and Gomorrah are not homosexuals, but perverts! If there are people being condemned by God because of sexual addiction, they are not the homosexuals, but real men and women (if we can call them real) who, because of their sexual perversions, may do ‘it’ with the opposite and the same sex!

(Romans 1:26-27) “Because of this, God gave them over to shameful lusts. Even their women exchanged natural relations for unnatural ones. In the same way the men also abandoned natural relations with women and were inflamed with lust for one another. Men committed indecent acts with other men, and received in themselves the due penalty for their perversion.” NIV

There are decent and God-fearing homosexuals. Although, naturally, they have affection for men, but they practice self-control to obey God’s law!

(Titus 2:11-12) “For the grace of God that brings salvation has appeared to all men. It teaches us to say “No” to ungodliness and worldly passions, and to live selfcontrolled, upright and godly lives in this present age…” NIV

Can these decent and God-fearing homosexuals make it to heaven? 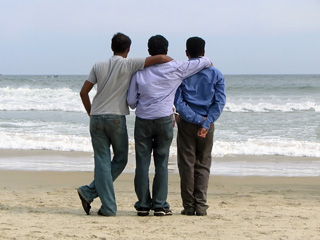 I BELIEVE THEY WILL!

95 thoughts on “Can a Homosexual Make it to Heaven?”