If no one in my country is charged and caught in such acts of deceit and fraud, it does not mean that the Bible is not right.

(Job 9:24) The earth is given into the hand of the wicked: he covereth the faces of the judges thereof; if not, where, and who is he?

If there is none in the Philippines, there must be in other countries of the earth. It is satan, the devil, that covereth the faces of these judges. If someones face is covered, his real face is hidden. What is the covering that satan employs? The covering is a ‘make-up’ devised by satan just as he is doing for himself.

(2 Corinthians 11:14-15) And no marvel; for Satan himself is transformed into an angel of light. Therefore it is no great thing if his ministers also be transformed as the ministers of righteousness; whose end shall be according to their works.

Satan pretends to be an angel of light. His ministers follow suit. They also pretend to be of God; holy, reverend, honorable, etc, but the face that they show people is not their real face. This is how his deceit is propagated more intensively by satan. He deceives the hearts of people with power, like judges, religious leaders, kings, presidents, and prime ministers. But how? They are being prepared by satan. People that succumb to the caprices of satan, especially those who are greedy of power, fame, and money are prepared for a special satanic purpose. They are given special earthly intelligence and wisdom by satan.

The wisdom that is common to many princes and rulers of this world is not Godly, but satanic!

(James 3:15) This wisdom descendeth not from above, but is earthly, sensual, devilish.

By such wisdom, their real face is covered.

(Ecclesiastes 8:1) Who is as the wise man? and who knoweth the interpretation of a thing? a man’s wisdom maketh his face to shine, and the boldness of his face shall be changed.

The boldness in man’s face can be hidden by his wisdom. God’s wisdom, to the contrary, hides nothing.

(James 3:17) But the wisdom that is from above is first pure, then peaceable, gentle, and easy to be entreated, full of mercy and good fruits, without partiality, and without hypocrisy.

Note that God’s wisdom is without hypocrisy. Hypocrisy is one of the greatest devices of satan to mislead and deceive people. Religious leaders in the time of the Lord Jesus Christ are hypocrites.

(Matthew 23:15, 27) Woe unto you, scribes and Pharisees, hypocrites! for ye compass sea and land to make one proselyte, and when he is made, ye make him twofold more the child of hell than yourselves…

…Woe unto you, scribes and Pharisees, hypocrites! for ye are like unto whited sepulchers, which indeed appear beautiful outward, but are within full of dead men’s bones, and of all uncleanness.

Hypocrisy is present to almost all (if not in all) leaders of this world. Presidents, magistrates, judges, leaders of nations, and religious leaders do practice hypocrisy.

At this juncture, I want you to fasten your seatbelts: I was one of their victims, as our Lord Jesus Christ once was! He was a victim of the hypocrisy of kings, chief priests, a procurator, and the judges who sentenced Him to death, without committing any offense against anybody!

(Matthew 2:7-8, 12, 16) Then Herod, when he had privily called the wise men, inquired of them diligently what time the star appeared. And he sent them to Bethlehem, and said, Go and search diligently for the young child; and when ye have found him, bring me word again, that I may come and worship him also…

…And being warned of God in a dream that they should not return to Herod, they departed into their own country another way….

…Then Herod, when he saw that he was mocked of the wise men, was exceeding wroth, and sent forth, and slew all the children that were in Bethlehem, and in all the coasts thereof, from two years old and under, according to the time which he had diligently inquired of the wise men.

(JOHN 19:6) “When the chief priests therefore and officers saw him, they cried out, saying, Crucify him, crucify him. Pilate saith unto them, Take ye him, and crucify him: for I find no fault in him.”

From birth to death, he was a victim of hypocrisy and injustice.

No less than the (NCR) Commission on Human Rights National Capital Region (CHR-NCR) of the Republic of the Philippines testifies to the fact that my rights as a citizen and as a preacher is violated by an officer under the office of the President in our country. 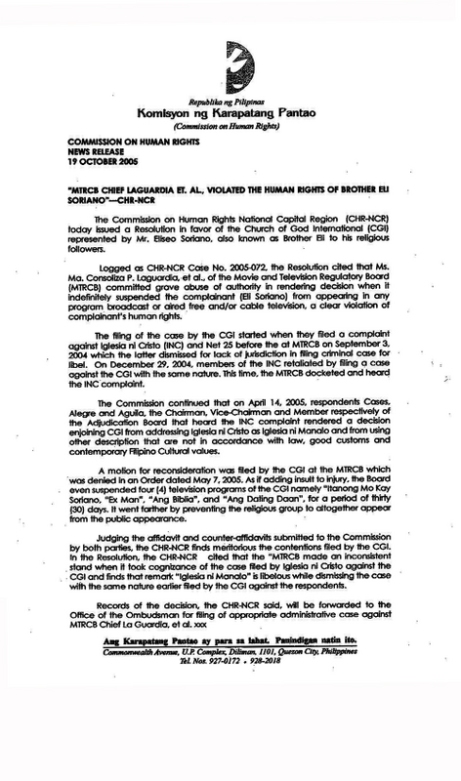 MANILA: Expatriate businessmen in Asia perceive the Philippines as the most corrupt country in the region, according to a survey released Tuesday.

Singapore was ranked as the least corrupt of the 13 economies surveyed, followed by Hong Kong and Japan, according to the annual corruption survey conducted by the Political and Economic Risk Consultancy, based in Hong Kong.

“The Philippines has the distinction of being perceived in the worst light this year,” the survey stated. “People are just growing tired of the inaction and insincerity of leading officials when they promise to fight corruption.”

The survey, conducted in January and February, queried 1,476 expatriate executives in 13 countries and territories in Asia. The Philippines scored 9.40, where a score of zero is the least corrupt and 10 is the most corrupt.

In the 2006 survey, in which Indonesia was regarded as the most corrupt, the Philippines scored 7.80. Indonesia improved its score to 8.03 this year, a development that the report credits to a government anti-corruption campaign. Read More

I am sure you know the story behind the Praise the Lord Movement (PTL) of Jim Bakker; the story behind Jimmy Swaggart’s Ministries; about what is happening in the ministry of Benny Hinn, being investigated by CBC; the Mormons’; the Jehovah’s Witnesses; the Seventh-Day Adventist (SDA); and the most famous of all, the Roman Catholic Church (RCC), and many more.

Traveling aboard our ‘time machine’, I invite you to travel back in time with me; dig deeper and find the roots of all the deceits and frauds present in this world.

Would you believe that even I and my taste buds were once deceived and perverted by earthly fraud? Let us take a ‘U-turn’ and learn more.

All Aboard in the Journey to the World of Truth

An Epoch of Fraud and Deceit

The Best Education at the BestUniversity… Ever!

Faith Can move Mountain of Shyness

Conscience and the Bible

For Reasons Right and Wrong, Jesus Christ is Being Preached About

The Red Alert is a False Alarm