To know the function and the capacity of a particular machine is to learn from the very person who constructed the machine. The best education about every reality in life is to learn it directly from the Creator. John 1:1-3 has this to say:

Note: The ‘Word’ in Greek manuscripts is the ‘LOGOS’.

When I say realities in life, I do not only mean physical things but, spiritual, also. Physics, as a branch of human science does not believe in spirits; but it is in fact a reality of life. James 2:26 says that the physical live and exist because of the spirit.

“For as the body without the spirit is dead, so faith without works is dead also.”

In fact, we can learn from the ‘Word’ or the ‘Logos’ not only things we can see; also things unseen. Colossians 1:15-18 proves this:

Job, a holy man, who asked questions about what is happening to him (which he thinks are unusual) was admonished by God to think soberly. God asked him if he knows how everything came into existence. The following questions were asked by God to him:

Where was thou when I laid the foundations of the Earth?(Job 38:4)

Of course, Job can not answer; but there is someone who was a star witness in the creation of everything: that is the Logos or, in other scriptures, called the Wisdom of God. The Wisdom of God is Christ. He is also the Logos. 1 Corinthians 1:24 says:

“But unto them which are called, both Jews and Greeks, Christ the power of God, and the wisdom of God.”

“But we speak the wisdom of God in a mystery, even the hidden wisdom, which God ordained before the world unto our glory: Which none of the princes of this world knew: for had they known it, they would not have crucified the Lord of glory.”

In James 2:1 The Lord of Glory is Jesus Christ.

“My brethren, have not the faith of our Lord Jesus Christ, the Lord of glory, with respect of persons.”

Undoubtedly, our Lord Jesus Christ, the Logos, and the Wisdom of God, knows best about everything that exists. In Revelations 3:14, He is a witness unto all creations.

“And unto the angel of the church of the Laodiceans write; These things saith the Amen, the faithful and true witness, the beginning of the creation of God…”

“The LORD possessed me in the beginning of his way, before his works of old. I was set up from everlasting, from the beginning, or ever the earth was. When there were no depths, I was brought forth; when there were no fountains abounding with water. Before the mountains were settled, before the hills was I brought forth: While as yet he had not made the earth, nor the fields, nor the highest part of the dust of the world. When he prepared the heavens, I was there: when he set a compass upon the face of the depth: When he established the clouds above: when he strengthened the fountains of the deep: When he gave to the sea his decree, that the waters should not pass his commandment: when he appointed the foundations of the earth: Then I was by him, as one brought up with him: and I was daily his delight, rejoicing always before him; Rejoicing in the habitable part of his earth; and my delights were with the sons of men.”

Want the best education? In the best university? The Lord Jesus, in Matthew 11:28-30 has this to say:

“Come unto me, all ye that labor and are heavy laden, and I will give you rest. Take my yoke upon you, and learn of me; for I am meek and lowly in heart: and ye shall find rest unto your souls. For my yoke is easy, and my burden is light.”

It is marvelous to know the exact wisdom behind everything even before they are discovered by human science. A very good example is what God told Job:

“Out of whose womb came the ice? and the hoary frost of heaven, who hath engendered it?” (Job 38:29) 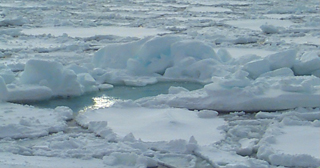 The invention of freezers and refrigerator proves this. The wisdom behind refrigeration is surely found in the Bible!

About 3000 years ago, God asked Job this question:

“Hast thou entered into the springs of the sea? or hast thou walked in the search of the depth?”

Who knows the spring of the sea until recently when it was discovered in 2006? An exploration through a submarine photographed an erupting volcano under the surface of the sea (http://oceanexplorer.noaa.gov/explorations/06fire/logs/april29/media/movies/nwrota_brimstone12_video.html)

There really are springs found by an exploration at the sea bed.

Through a special arrangement with the publisher, William Morrow, Oregon Sea Grant is pleased to make available a popular book about contemporary ocean research at a great discount. Totally unknown before 1977, seafloor hot springs occur in numerous places along the globe-encircling chain of underwater mountains known as the mid-ocean ridge. The exploration of these springs in manned submersibles has resulted in an extraordinary range of discoveries about our planet and the life on it. “Fire Under the Sea” focuses on these discoveries, which concern the complex relationships between the inner heat of the earth and the ocean that swirls about it, the search for the mechanism of gold formation, the adaptations of life under extreme conditions, and ultimately the origin of life itself. (https://admtn.ucsadm.oregonstate.edu/ustores/web/product_detail.jsp?PRODUCTID=145)

With only about 5 percent of the sea floor explored in detail, a picture is emerging of a vast system of natural undersea dynamos, fueled by hot springs, that produce not only valuable mineral deposits, but habitats for unique, heat-loving organisms that can provide materials for products ranging from detergents to pharmaceuticals. (http://www.spaceref.com/news/viewpr.html?pid=10587)

Another information known in the Bible before it was discovered by man is written in Job 26:7.

“He stretcheth out the north over the empty place, and hangeth the earth upon nothing.”

Who knows, about 3000 years ago, that the earth is hanging on an empty space? The Bible has it! Anyone who wants to challenge this? Oh, you silly fools!

The errors, guesses, and miscalculations of famous and respected scientists in the past like Thales, Pythagoras, Ptolemy, Anaximander were because of their ignorance of the Bible. They may be regarded as educated and learned men, but their lifetime of search and research was proven to be either inaccurate or wrong because of the simple reason that they did not ask the ‘Logos’ in the Bible.

Another marvelous knowledge known to the Bible but was only known to science very recently is found in Job 38:31,33,38.

“Canst thou bind the sweet influences of Pleiades, or loose the bands of Orion? … Knowest thou the ordinances of heaven? canst thou set the dominion thereof in the earth? … When the dust groweth into hardness, and the clods cleave fast together?”

The formation of heavenly bodies is very clearly elaborated in the preceding verses. Dust groweth into hardness, and the clods cleave fast together. Everything is formed from dust. Ecclesiastes 3:20 says:

“All go unto one place; all are of the dust, and all turn to dust again.”

Ask scientist and they will tell you that heavenly bodies are formed by the clinging together through gravitational pull of dust in space. Astronomers have developed a theory about how our solar system formed that explains why it has small, rocky planets close to the sun and big, gaseous ones farther away. Astronomers believe our solar system formed about 4.6 billion years ago from a giant, rotating cloud of gas and dust called the solar nebula. Gravity pulled together a portion of gas and dust at the center of the nebula that was denser than the rest. The material accumulated into a dense, spinning clump that formed our sun. (http://www.nasa.gov/worldbook/planet_worldbook.html)

Realities under the surface of the sea, on land, and beyond the horizon in heaven, things seen and unseen, can be learned from the best university which teaches wisdom with authority far far advanced than the best university, established by men, can teach: The Bible! The best teacher is the Creator! And the best student is someone who believes. Enroll now!

I will be leaving a question to each and everyone that may read this article: IS THERE ANYBODY YOU KNOW WHO CAN TELL EXACTLY THE WISDOM BEHIND EVERYTHING THA EXISTS BEFORE THEY ARE UNDERSTOOD BY MAN?

18 thoughts on “The Best Education at the Best University… Ever!”